When I was young I was extremely allergic to cats. I tried hard to dislike them. They lacked personality, they weren’t friendly or loyal, they destroyed everything, they were creatures I wanted nothing to do with. That’s what I told myself. I had to trick myself into believing these things because a simple snuggle with a cat could trigger an asthma attack and put me into hospital.

When I was a kid I had a couple of friends who lived in pet-less homes. These were the places that I could ‘sleep over’ without concern. My friend S – an approved pet free sleep over house – had recently gotten a kitten. I remember excitedly heading over to her house that night for the sleepover where, unbeknownst to my parents, I would be able to play with this adorable kitten all night. After all, it was small. What harm could it cause? We tore the edges off the dot matrix printer paper and helped the kitty chase and twirl about. We scattered weebles across the floor and watched as the kitty tried to make them fall down. It was SO CUTE! It also caused my asthma to flair up and lo and behold, there I was in the middle of night unable to control my wheezing, asking Mrs.S’sMom to call my parents. I was in trouble.

I had sleepovers at other homes with pets. It was important that I followed rules to survive the night; do not touch the animal, do not sit on furniture or blankets where the animal sits, wash your hands as often as possible, do not touch your face, and ALWAYS have your inhaler with you. These are tricks that helped as I got older but I still suffered. You try not petting a puppy or kitty who just wants to say hello with a nuzzle, it’s near impossible. Sneezes, swollen eyes, wheezing, itchy skin always followed when I was around someone else’s pets.

As a college student I loved to visit the pets of my friends. I was old enough to recognize the symptoms before they got serious, and I was always able to leave if I needed to. The older I got, the more I did this and by the time I graduated from college, I decided that the suffering I experienced around cats, now much less severe than when I was a kid, was worth the companionship of a lovable furball.  Sure, I suffered, but a strong antihistamine and modern asthma medication (it came a long way from the band-aid treatments of the 80s) would make it possible to have my first pet.

In 2002 I brought home an adorable black and white kitten. She was tiny and had giant ears. She was not cared for when I brought her home so I cleaned her up, got her on medications, and waited for her to accept me as her new buddy. It took her some time to come around to people in general. For the first few years she would shy away. She was energetic and mischievous, and not at all snuggly.

Counter to all of the things I told myself about cats as a young kid, she was chalk full of personality, she was very loyal, and she was fun to play with and watch grow.  She always maintained a distrust of people, particularly men (for reasons I wont delve into here) but when she met my now husband for the first time she took to him right away. I knew that he was something special because my cat friend approved at first meeting.

She was in love with him from the start, much like I was, and she excitedly approached him every time he would visit. Little did she or I realize that we had found the adventure of our lives when we found him.
This cat has moved from Burlington Ontario (her first home) to Milton ON, to Peterborough ON, to Yarmouth ME, BACK to Peterborough ON, then to Richmond VA, to our rental in Dallas TX, and then to our new home also in Dallas.  She’s been a trooper through all the packing and moving and car rides. She hated all the travel but managed to adjust really well. Only our move into the house was she unable to cope. 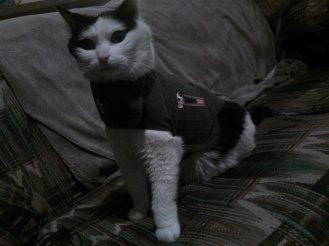 This will come as no surprise to any pet owner, but this kitty has been my greatest companion and comfort for the last 14 years. We have been with each other through multiple life transitions and snuggled our way through good times and bad. We’ve enjoyed and lost other pet friends, Nom the bearded dragon, Rhea and Saber the leopard geckos, Cobra and Kai the goldfish,  and Commander-Cobra’s second wife.  She has helped me host a number of rocking parties, keeping that spot under the bed safe from stray party goers and she has even helped my art by tracking her paw prints through pastel and paint to add her special feline touch. 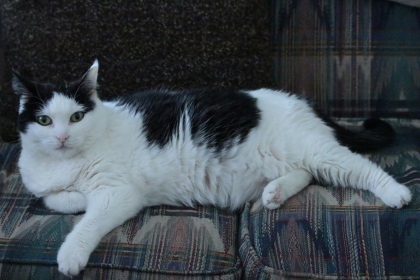 About a year and a half ago my kitty friend spent the night in emergency vet clinic. She was dehydrated, she had blood in the urine, and was ‘not right’. It cost us thousands but we discovered that my best fur pal had renal insufficiency. I would later learn that this was a common ailment with aging cats but that didn’t stop the river of tears. My kitty was aging and not going to get better. We found a great vet and got her on a special diet and for a long time she seemed to be trucking along just fine. Then we bought a house and moved one last time. She hasn’t really been 100% ‘herself’ since. She has slowed down, sleeps more, and is becoming forgetful. She doesn’t always find her litter box in time, or at all, but she’s never in trouble for it. We do the best we can to make sure she is getting enough food and water and pets. She may have slowed down but she still is mouthy as ever. She loves to watch me get ready for work in the mornings ( a lifelong obsession of hers) she likes to yell at me when I am getting ready for bed, she likes to push her water dish around the house, spilling as much as she drinks, and she loves to get up in my face when I’m making dinner. And since becoming pregnant, she likes to check up on me when I need a nap on the couch by laying across my budding baby bump.

It’s tough to watch your little pet friend age and slow down. It’s very tough to know that we may not have many more years together, but I enjoy each cuddle, purr, and moment that I can hear those meows when I am getting her some salmon from my plate, or a treat from the pantry. I cherish her dearly and intend to make her retirement one that other cats would envy. After all, when I’m her age and I can’t quite make it to the toilet on time or keep my hair brushed and fresh, I too will want someone to love me regardless; someone to snuggle up to on my favourite spot on the love seat and cuddle. The truth is I love cats, all cats, and especially this cat. No matter what my nine year old self was trying to believe back then, my heart will forever be bigger because of my love for this kitty. Every sneeze and wheeze has been worth it.

2 thoughts on “My Aging Friend.”